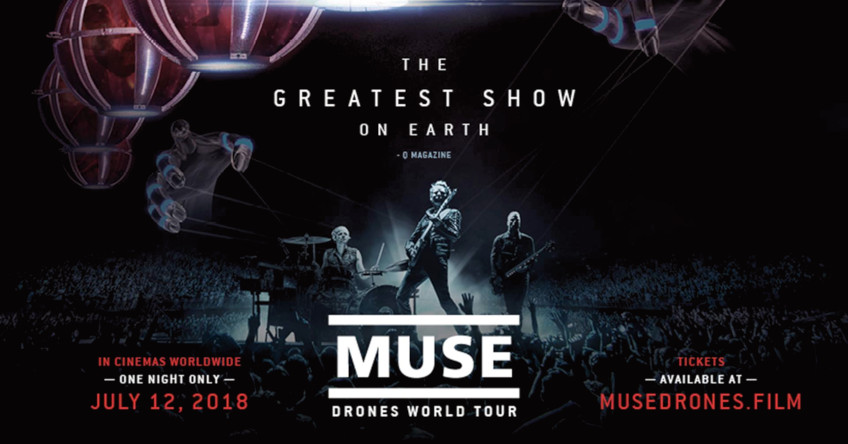 I had big expectations for Muse: Drones World Tour after 2013’s excellent Live at Rome Olympic Stadium. I wasn’t expecting a Hullabaloo beater, but I would have been happy with a solid rendition of the album’s tracks and older singles against the unique backdrop of the arena tour’s “in the round” setup and 360-degree Drones-themed experience.

We started with a documentary-style section while Aftermath (which didn’t actually feature in the film) plays. Frontman Matt Bellamy told us how the Drones tour and film were meant to “take the audience on a journey” through “the story of the album”, which was very well done with some of the props and effects when I saw this show live in London back in 2016.

Then things got going, kicking off with the usual suspects (the Drones intro, Psycho, Reapers). I quickly realised I was going to have to watch the Blu-ray later, because Vue Reading’s audio system just couldn’t handle it. I know it’s not cool to say a rock gig was too loud, but when several instruments were layered on top of each other this actually hurt at points (and it wasn’t just me – I heard other people talking about it afterwards and there’s a whole thread devoted to it on Reddit). The crowd mix was also very high at points compared to the music. It was just about bearable, but it was an annoying distraction for the duration of the film.

Matt’s ramble about the Drones theme also faded away as the film started ticking off the biggest singles from the band’s poppier albums at the expense of better tracks. Weirdly, even Revolt, which was a single from Drones, was left out. With the exception of The Handler, it was practically Muse’s Greatest Radio Hits, many of which we’d already seen in other Muse films.

That is until The Globalist. The ten-minute prog-rock epic actually got the treatment it deserved with some great visuals. The sound once again suffered once the heavy riff kicked in, making it hard even to hear Dom’s drums over the distortion, but its slow sections provided a welcome break from the fast-cut, HAARP-style editing that I thought had finally been left behind when Live at Rome Olympic Stadium was released.

Speaking of editing, there were a few odd choices in Drones World Tour. Almost every shot was flashed up for just a few seconds and most of them were closeups, meaning many of the cool stage effects I witnessed in person were glossed over. Also, the footage came from different gigs, which made things a bit disjointed when one moment the crowd was singing Starlight with a strong German accent and the next Dom was speaking to them in Italian.

There were also – and this may just have been me struggling with the audio in the cinema – moments where it seemed like the tone and tempo of certain songs changed unexpectedly, in some cases suggesting cuts and in others suggesting that different performances may have been spliced together. At least it seemed that way to me – I wonder if anyone else noticed.

After a Drones interlude, the band took to the stage again to play Take A Bow, which is a very welcome gem from Muse’s past but a bizarre choice for a film that seemed to be targeting a mainstream audience rather than hardcore fans of the band. It’s wasn’t as good as the HAARP performance and Matt didn’t hit the high note at the end like he used to, but I’ll take it.

The finale was Mercy followed by Knights of Cydonia, the usually-great harmonica intro to which was the absolute worst of the assault on my ears. Overall, I was slightly disappointed by the setlist and video editing, but very disappointed by the sound in the cinema, which turned some of Bellamy’s amazing guitar work into something I wanted to jam my fingers in my ears to avoid. By the end, I was actually glad to be able to leave and save my hearing.

I’m a big Muse fan and I’ll probably enjoy watching Drones World Tour again once it’s out on Blu-ray with the sound at a more comfortable level. Still, if you’ve never watched a Muse gig before then I’d recommend you start with one of the better options out there, like the fantastically-shot Live at Rome Olympic Stadium or the all-time classic Hullabaloo.

Bonus: At the end of the credits, the lights don’t go up. The three band members fill the screen and Matt Bellamy tells us we’re going to get a special preview of a new song called Something Human. What we actually get are more synthwave-style visuals and a distorted two-second clip of him wailing “something human” over music that sounds nothing like the rock we’ve just paid to see. Then black. The entire screen is laughing. It’s out on July 19th, apparently…

Looking for the comments? My website doesn't have a comments section because it would take a fair amount of effort to maintain and wouldn't usually present much value to readers. However, if you have thoughts to share I'd love to hear from you - feel free to send me a tweet or an email.
« How to build a Formula 1 car in Kerbal Space Program
Security log analysis: How to group by two fields in Splunk »